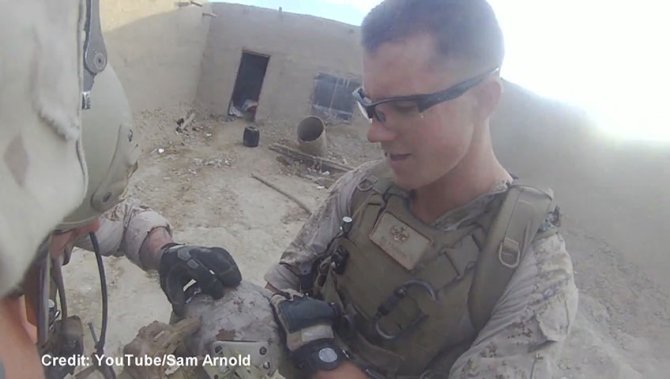 A video of three U.S. Marines conducting an operation in southern Afghanistan shows one Marine surviving a direct headshot from a Taliban sniper.

The chilling video, posted to YouTube by veteran Sam Arnold in late September, has garnered more than 1 million views.

The incident appears to have taken place in Afghanistan’s Nawzad district of Helmand Province in 2013, according to the YouTube author.

The video shows three U.S. troops investigating a compound before attempting to exit through a darkened tunnel.

Just as one Marine says “You’ve got cover out there?” to his fellow soldiers, a shot can heard followed by one man’s jerking backwards.

“Hey, we’ve got a sniper!” says the soldier with a video camera. “Dude, you got shot! I saw it hit your Kevlar. You lucky son of a b—-, look at that.”

The lucky Marine later inspects his helmet, where the only visible damage appears to be a tear on the camouflage cover.