#EvaluatePR: Experts set to discuss the synergy between PR and Measurement.

Oscar Onyeama – We Need A Closure by Joseph Edgar

Senate President, David Mark, on Friday said he had forgiven Hon. Abdulmalik Cheche (PDP Niger) who assaulted him on the floor of the House of Representatives chamber on Thursday during the pandemonium that ensued following the invasion of the National Assembly by security agents.

Mark in a statement by his Special Adviser on Media, Mr. Kola Ologbondiyan, in Abuja, also said that he did not hold any grudge against Cheche over his action.

Mark added that both the Speaker of the House of Representatives, Mr. Aminu Tambuwal and the Niger State Governor, Alhaji Babangida Aliyu, had already pleaded with him on behalf of the lawmaker over his unruly behaviour.

He described his experience in the hands of the lawmaker as “his prize and sacrifice for leadership.”

He said, “It is a sacrifice I am prepared to accept. I was physically stopped at the gate and booked from accessing the National Assembly complex for about an hour . I was also tear gassed at the lobby of the White House as I made my return from the Green Chamber.

” In all these, I bear no ill feeling . AbdulMalik (Cheche) is my colleague. I have forgiven him. I believe we can continue to work together in the interest of peace and sustenance of democracy.”

Providing an insight into what transpired inside the lower chamber, Mark said his visit to the Green Chamber, was “to ascertain the safety of Speaker Aminu Tambuwal and his colleagues having received reports that canisters of tear gas were targeted at them.”

He said, “I also went to confer with Mr. Speaker on the need to suspend plenary in both Chambers in order to restore sanity to an environment that had turned restive and becoming uncontrollable.

” My intention was to safeguard the sanctity of the hallowed Chamber and to guarantee the respect of the legislature. I consider the unwarranted and needless attack on my person by Hon. Abdulmalik Usman Cheche

“Like I have repeatedly said, I will do anything necessary to keep the sanctity of the parliament as an institution and safeguard the respect of every legislator.

” I therefore urge all political actors to always remember that we must first have a nation before we can achieve our various individual ambitions.

“We must at all times restrain ourselves from actions that cannot add value to our hard earned democracy.

“We should remain guided by the rules no matter how strongly we perceive our positions to be the most appropriate.” 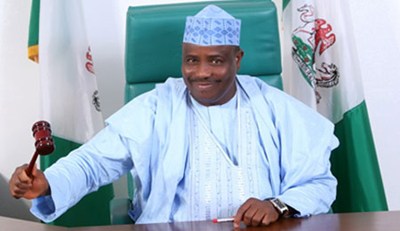